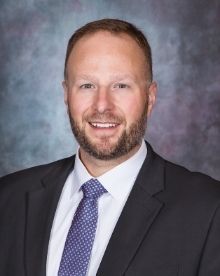 Joseph Grant serves as Vice President of Commercial Lending.  He started his career in financial services in 2004 and joined Crossroads Bank in 2007.

He earned his bachelor’s degree in Business from IPFW and master’s degree in Business Administration from Ball State University.  He is also an Army veteran and served in the National Guard for six years.  In his free time, he enjoys golfing and spending time with his wife and two children.

From time to time, we provide links to other websites for the use of our visitors, which have been compiled from internal and external sources. By clicking “Continue” below, you will be opening a new browser window and leaving our website. Although we have reviewed the website prior to creating the link, we are not responsible for the content of the sites.

Information on linked website pages may become dated or change without notice, and we do not represent or warrant that information contained on these linked pages are complete or accurate. We suggest that you always verify information obtained from linked websites before you act upon such information.

The privacy policy of this bank does not apply to the website you visit. We suggest that you always verify information obtained from linked websites before you act upon such information.

Regular e-mail is not necessarily secure against interception. If your communication is very sensitive or includes personal information such as your account numbers, credit card number, or social security number—you may want to call us, send it through the U.S. Post Office, or use our Secure Contact Form.